Generally these systems are more suited to new builds than existing houses due to the installation of a large tank in the ground and plumbing.

Grey water systems are where the rainwater that falls on your roof is collected in a large tank and used in your toilets, washing machine and garden tap. The tank is usally buried in your garden.

A big factor in deciding if you want to install one of these systems is whether you will collect enough water to meet your needs. This will depend on the average rainfall in your area (e.g. Galway gets twice as much rain as Dublin) and the area of your roof. 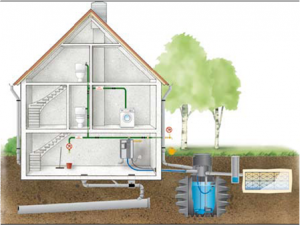 Good ventillation is an important requirement of a building to supply fresh air and avoid condensation. However, it also removes heat from a building in the colder months.

Most older houses have natural ventillation where vents in walls, chimneys, cracks and gaps in the floors, windows and roofs create a route for air to enter and leave the house. Further ventillation is assisted by fans such as in bathrooms and kitchens.

An air tightness test can be used to identify cracks and gaps, where heat is being lost. These areas can then be sealed while at the same time ensuring that these is still adequate ventillation to the house. The test involves temporarily sealing all of the existing vents and blowing air into the property from the front door. Using smoke the tester can then see where the air is flowing. 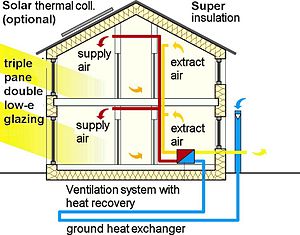 In recent years heat recovery ventillation systems have become available. These require the house to be sealed very well. The systems uses vents in areas around the house to remove air, extract the heat from this air and use it to heat the fresh air supply. They are more suitable for new houses which are air tight.

Air source heat pumps work by converting the energy of the outside air into heat. They supply a comfortable temperature inside the house as well as energy for the hot water system. As with all heat pumps, air source models are most efficient when supplying low temperature systems such as underfloor heating. 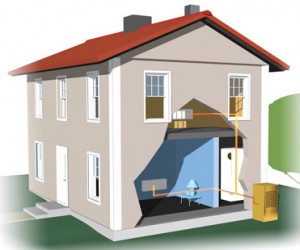 When properly sized, the heat pump should be able to supply all of the space and hot water heating to the house. Generally these systems will produce 4 times as much energy as you use, giving you a huge energy and carbon saving.

Air source heat pumps are reported to be less efficient than geothermal systems but they can be ideal for houses and apartments where outside space is limited. There are also lower installation costs and less disruption.

Underfloor heating has many benefits due to the fact that it heats the room with a combination of convectional and radiant heat, where the floor evenly releases heat. This is better for comfort and efficiency compared to radiators as they emit heat through convection only.

They are also more efficient as they operate at lower temperaures than conventional radiators and operate a thermal store. 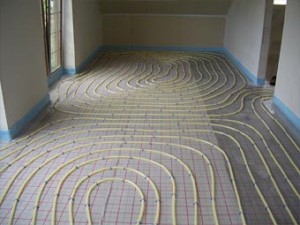 A combination boiler is so-called because it has two heat exchangers, one for space heating and one for water heating. 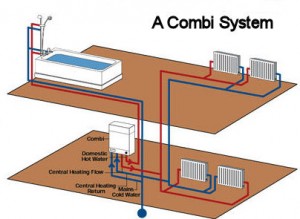 In these systems, hot water is generated as it is needed. There is no storage of hot water and hence no energy losses due to storage.

These boilers are most applicable where a small number of people are using the system, the house is small and multiple use is infrequent. The drawback of these systems is that only a limited amount of hot water can be drawn off at any time.

Geothermal Heat Pumps are also called ground source heat pumps and can be used for space and water heating. They use the ambient heat of the earth beneath the surface which is between 11°C and 13°C in Ireland.

By using a compressor, heat pumps can boost heat at a low temperature and release it at a higher temperature so that it can be used to heat the house. For every unit of electricity used to pump the heat, 3-4 units of heat are produced, leading to much reduced fuel bills and carbon emmisions. 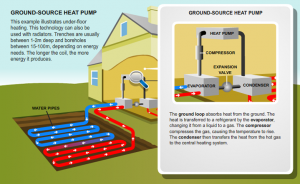 These systems are most efficient when used in conjunction with underfloor heating in suspended timber floors as they are more responsive.

The good news is that is is generally feasible to install a geothermal system in an existing house even in a housing estate.

In the case of an existing house in a housing estate a vertical system is more suitable due to space constraints.

The vertical system requires drilling at least one 150m hole which is then plumbed to the heating units and heating system (these details should be advised by your installer). The bore hole can be in the front or back garden.

Note: If you are installing solar water heating and a geothermal heat pump, it is a very good idea to integrate the systems as it will give good gains in efficiency.

Glazing can be a high area of heat loss from a property. This can be reduced wth the installation of double or triple glazing. This type of glazing uses 2 or 3 layers of thin glass with a cavity. 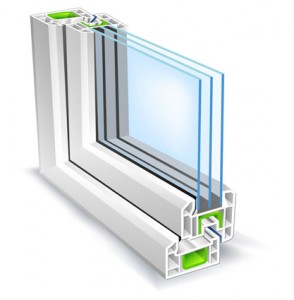 The elements affecting a window’s performance include:

Currently most double glazed windows have a U-value of 1.6.

Wind turbines use propeller blades to catch the kinetic energy from the air and convert it to electricity. Various options are available for homes, from small scale devices to more complex systems. In some cases a turbine can generate up to half the energy demand for a property.

The main factors which need to be taken into account are:

Open sites in rural areas are obviously more suitable, but options are also available for dwellings in urban areas.

A reputable vendor should perform a wind speed survey for a prolonged period of time to assess the viability of the turbine. This will then infrom the desicion to proceed or not.

Photovoltaics (PVs) convert the sun’s energy into electricity which can be used in the home. 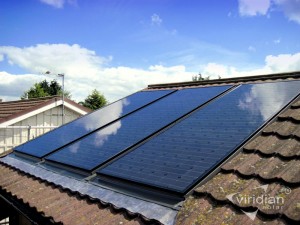 Photovoltaics are made using semi-conductor technology. They produce an electrical current when they are exposed to light.
The systems can be quite complex and comprise of:

Currently the cost of photovoltaics arrays are too great for them to be ecconomically viable in Ireland. This could change soon with newer methods of manufacture. That said, photovoltaics can still represent a huge energy and carbon saving for your home.

There are a number of systems which can be used to insulate the exterior of a house. The usual process is:

The contractor pays attention to details such as windows sills and window surrounds to ensure the façade of the house is unchanged.

Depending on the amount of insulation applied, the insulation of the house will increase dramatically.